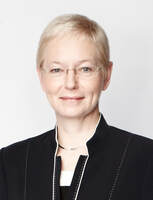 Prior to academia, she was an entrepreneur in Germany. Her 25 years of entrepreneurship experience include years as business owner in a manufacturing family business in the 4th generation and leading an IT start-up as supplier to the automotive industry. She held several honorary offices, e.g. being commercial judge at the State Court of Hessen / Germany. She holds a Dual Executive M.B.A. and a Ph.D. in Entrepreneurship. During her academia and business life, she received several awards: Award of Excellence in Global Entrepreneurship and Academic Education (2017), Oscar for Small and Medium-sized Businesses in Germany 2003, Laureate Fit for the Stock Exchange (Business Plan Competition, 2001), the award of the County of Hesse and of Volkswagen “Autovision Promotion North Hesse” (Start-up competition, 2000), and Karl-Miescher-Award in Science of Colors (for a remarkable scientific achievement, 1995).